although she roughly looks around 18

Venacid [Ven-acid] is one of the main protagonists in the My Friends are Killers story. Venacid has no known relatives and tends to lurk in either the lounge room or her own room. She makes her first appearance in Chapter One, Where she greets the rest of "The Group" with a somewhat pissed of attitude.

Nothing much else is known about Venacid other than she cares a lot about Hewie.

Venacid's attire consists of a white battered hoodie that has been patched over with green material, black fingerless gloves, a green scarf, a gas mask, black short shorts, a black undershirt and black boots that go just below the knee.

Venacid has rather olive skin and her legs have scars, her eyes are bright green and her hair colour is a dark caramel brown.

From chapter Nineteen Venacid is still known to wear the same attire that she has worn since chapter 1. Although her hair is short at the beginning of the series she lets it grow throughout the rest of the series keeping it long.

Venacid is known to be a rather "moody" character throughout the series, although she can be sarcastic and intelligent she is frequently known to pay out on others before thinking about her own doings.

Venacid tends to glare at others a lot usually other in spite or in rage.

Venacid although has some real anger issues that she usually handles by either glaring at others or threatening them.

Hewie: Venacid is very loyal towards Hewie and is the very best of friends with her, although yet the same Venacid holds a very high regard of respect for Hewie.

Scarlet: Venacid is known to have fought with Scarlet over “The Lab” these two clash (even though Scarlett forgets it).

Jason: Venacid has a sort of love hate friendship with Jason, She gets angry at him for (most of the time no reason) various things, although she would not willingly cause harm to Jason unless he pushed her too far.

Meek & Skar: Venacid knew something funny was going on with these two and the “farm” This is mainly why Venacid decided to leave behind the group in search for Hewie.

Sebres: Venacid doesn’t trust Sebres although she is willing to work with him if she must.

-Venacid's weaponry consists of poisons,toxins,acids, other harmful liquids and knives. 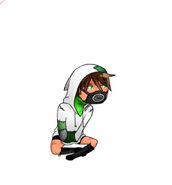 Add a photo to this gallery
Retrieved from "https://myfriendsarekillers.fandom.com/wiki/Venacid?oldid=318"
Community content is available under CC-BY-SA unless otherwise noted.