although she is roughly around 18

Skylar is one of the main protagonists in the My Friends are Killers story. She is known to be the quiet and sarcastic character. She is related to Jason her brother in the group and will commonly hang around him. She makes her first appearance in chapter one when meeting Jason at the front of the base.

Skylar wears a Blue Hoodie with a Silver metal mark on her right shoulder, along with black ripped jeans, black zip up boots with black finger less gloves and dog tags.

Her second appearance from chapter nineteen is a black leather jacket and a dark blue undershirt. She wears black jeans and black boots.

Skylar has light brown short hair which covers over her eyes. At the tips of her hair it goes to a lighter brown colour. She is quite pale and has grey (dark white) eyes. From chapters nineteen the right side of her cheek covered with a burn mark.

Skylar is sarcastic. A little bit twisted. And the kind of person that is more mature than some but you'll have to hold them back from drinking 8 shots in a row. She is a sadist ( ͡° ͜ʖ ͡° )

-Skylar owns a black Katana with a dinosaur pendant at the end of the hilt.

-She will often join Hewie to watch anime.

-Due to her past she is unable to give birth to any children.

-Both Skylar and Jason are less susceptible to the weather due to their past. 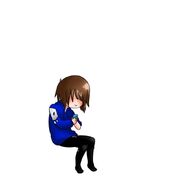 Add a photo to this gallery
Retrieved from "https://myfriendsarekillers.fandom.com/wiki/Skylar?oldid=319"
Community content is available under CC-BY-SA unless otherwise noted.