Scarlet is one of the main protagonists in the My Friends are Killers story. She is known to be the loud and childish character. She is also known to have ADHD and OCD, but no one really knows for sure.

She has no known relatives and is usually found in the kitchen cooking or in the basement making a new type of bomb or explosive.

From chapter one through to chapter twenty Scarlet had long dark red hair tied up in a ponytail. Scarlet has fair skin and bright purple eyes. After the "events" in chapter twenty-one scralet cut her hair and now wears her hair ear length and messy.

Scarlet is very childish and immature due to her tragic childhood, despite that she is usually the only one to clean the house and often the only one to cook food for the others. When angered Scarlet often retaliates harshly due to anger problems that cause her to have quite the temper.

Hewie: Scarlet pictures Hewie as an older sister and best friend. Scarlet probably wouldn't be around if it wasn't for Hewie and she tries to show this a lot.

Venacid: Although Scarlet and Venacid disagree at times, Scarlet considers Venacid one of her best friends and would do anything for her.

Skylar: Scarlet and Skylar don't really talk very much, but deep down Scarlet cares deeply for Skylar and if very fond of her.

Jason: Scarlet and Jason are close friends and scarlet isn't often mean to him, only when he does something wrong.

Skar: Scarlet and Skar don't really know each other very well, they are more of acquaintances then friends

Sizzlar: Scarlet doesn't know who Sizzlar is and is oblivious to his existence.

Meek: Scarlet likes Meek dearly and she considers the two close friends, Meek is very kinda and mother like and Scarlet warmed up to her quickly after meeting her.

Sai: Scarlet doesn't like Sai in any shape or form, this could be because she cares about Meek a lot and doesn't want her hurt or its just cause he's messy, we may never know

Dylan: Scarlet and Dylan are close but aren't really friends.

-Despite her age Scarlet acts for most of the time as a 6 year old.

-Scarlets weapon of choice is bombs, but she will sometimes use a knife .

-Scarlets favourite type of music is alternative and rock.

-Scarlet will often go days on end without eating.

-Scarlet will often join Hewie in watching My Little Pony. 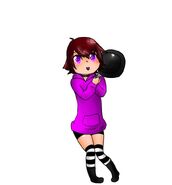 Add a photo to this gallery
Retrieved from "https://myfriendsarekillers.fandom.com/wiki/Scarlet?oldid=292"
Community content is available under CC-BY-SA unless otherwise noted.